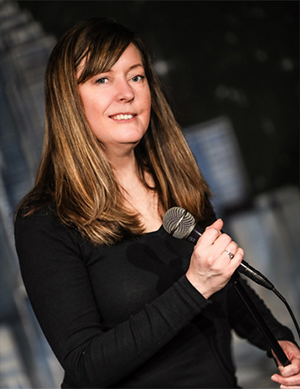 Based in Charlotte, NC, Crystalle took a comedy class several years ago to overcome a fear of microphones, onset by a debilitating experience in a Middle School talent show that left her running off stage, crying for her mommy. Although she no longer fears microphones, she still confidently cries for her mommy after every show. #therapy

She’s a Marine Corps Veteran (and will tell you about it). She is the producer of The 22 Tour; a comedy tour dedicated to leverage the healing power of laughter to put an end to the 22 (daily) military suicides. The tour showcases all veteran comedians and will be in 22 cities nationwide. www.The22Tour.com

She has also participated in the SheDevil Comedy Festival in NYC and the NC Comedy Festival. She’s opened for many well-established comedians and won quite a few comedy competitions – but none of that makes her funny…so you be the judge (but be gentle).